Here’s what one review said about The Wounded King:

““The Martuk Series” of novellas… really captivated me…with an amplified sense of brutality and pain, there’s dark stuff here kids, all the way around. And I am on pins and needles for the next entry in “The Martuk Series”, “The Tall Priest”.

Not only will this push the envelope, it will guild that envelope in gold, hone it to a razors edge and use it in a beautiful & brutal ceremony. It so fucking heavy and beautiful and I loved every moment of it.”

So head on over and pick up The Wounded King, the first in the series, FREE now thru Sunday, March 12th, 2017.

Since Amazon cut off the sample before it got to the text, I’ve included an excerpt here from The Tall Priest:

The taste of it raced ‘round my teeth and flooded my throat. The warmth of it fell from my eyes and stained my cheeks. The red of it dripped off my chin to wander along my neck and down my chest.

Her words the darkest of shadows clouding my calm, I’d returned to Uruk that morning, the Seer’s son, an unexpected charge, in hand. Soon I’d stood in the Temple, my explanations useless, The Elder’s rage quiet and terrifying. Moments later, I, a powerful priest in a land of powerful priests, had been dragged across the stone to face my fate.

Now I kneeled, a powerless man in a prison of wood and stone, broken and bloodied in the dead of night.

By morning I’d be a corpse.

I’ll give you my son.

Those words, heavy with heartbreak, had come from the Water first.

Days ago in a small room hidden far beneath the Temple, I’d stood with my beloved, The Elder, as the shimmering pool had whispered

“Don’t. Please,” The Elder said as I’d waited, gripping the edge of hollowed stone, my face dipped low as I silently called to the Gods.

the Water whispered, answering me, the words caressing my cheeks.

He’d begged and pleaded, the Elder, this most powerful man in a city of powerful men. Implored me to turn away. Allow the Water to hold its tongue. Keep its secrets. “It’s dangerous and I can’t bear to lose you,” he said, his voice thick.

“I need to speak with the Gods,” I said, braced with uncommon courage. And I’d ignored him, leaning forward, blade in hand, to slice, to watch, to see. To listen and hear, the blood dripping from my wrist the key unlocking my fate.

And the Seer from the Mountains had appeared in the shallow bowl, the words

falling from her lips.

These words, these three syllables, soon to be spoken a three nights walk from Uruk where she, the Seer, and I would stand, watching, under the shade of trees.

For that the guards put me in chains.

More words would be spoken on that path a three nights’ walk from Uruk, a darkening sky above. Of dangerous shadows and ravenous demons. Of monsters and magic. Of battles being fought and wars being lost. Here. Now. Unseen yet all around.

My heart, my gut, trusting her, I’d listen.

For that I lost my eyes.

Days later, now days ago, the tears wetting her cheeks as she stood, silent and waiting, her story at an end, my heart heard

And, against logic and reason and rules, braced with yet more uncommon courage, I’d relent.

For that the guards cut out my tongue.

Learning I’d heard and listened and trusted, my secret beloved, The Elder, had grown dangerously quiet. Discovering I’d acted against logic and reason and his rules, he betrayed me. In response to my misplaced courage, he ripped out my tongue, robbing me of my words, my knowledge, my secrets. And then, my eyes dug out and tossed to the hounds, those two words

finally took from me the pleasure of seeing the sun, the moon. The once-adored face of the love who betrayed me.

The Water in a small, secret room far below the Temple had spoken of that, too.

As had the sky, the earth, the forest, the stones…

Now I turned. My long legs tucked under, I rested on my knees, the cold stone of the cell burning my shins. In the dark of blindness, I heard them. Other prisoners. Their sighs and whimpers, tears and whispers. Heard the shuffling of thin fabric and the shivering of bare flesh. Felt the Silent Other, a stranger to me, waiting, watching. Drawing near, slow and patient, from the other end of the earthen hall.

A Silent Other I’d glimpsed when my eyes could still see, though I stood in the shade of trees under the gathering grey of relentless clouds. He haunted me still, this Silent Other, this stranger. His dishonest smile cutting through the terrifying darkness. The leather cloak falling from his shoulders hemmed with the clattering clank of tiny bones.

I swallowed the memory away, the blood from the still-bleeding root creeping down my throat. It still stung, that stolen tongue, though the burn in my missing eyes had given way to an exhausted thump, thump, thump.

Had I tears, I would have wept. For all I’d lost. All I’d never have. For mistakes and regrets. Lies. Betrayal. The ache of a broken spirit.

For my stupid willingness to abandon reason and peer into an endless wall of black.

But I’d been warned.

the earth had whispered.

the trees had echoed.

the sky had promised.

“It’s said she Called the Rain,” the Fat Priest said. He leaned, red-faced and sweating, against a boulder. “And that she battled a demon or something.”

I’d grinned, willing him silent, eager for the sound of the breeze snaking through the branches or skimming over the grass. The blessed silence of a bright sun warming my skin. The private joy of crisp air in every breath.

“A darkness,” I said instead.

“A darkness,” I said again, my voice louder and perhaps too harsh. “She battled a darkness, not a demon.”

“Stupid peasants.” The Fat Priest said. The rolls of flesh circling his neck jiggled as he chuckled before stopping to choke on a fit of sudden coughs.

I looked away. Ignored my travel companion, still resenting this pairing forced on me for this most important of tasks.

“Six days,” the Elder had promised. “In six days you will be home.”

And so the Fat Priest and I left when the moon was still high, walking into the shade of the thick trees outside Uruk. Stumbled up the trails into the deeper dark of the hills where the stars could no longer light our way. Struggled past the boulders and the stones. Angled past the vines and climbed over the immense roots of massive trees. Made our way, step by lumbering step, into the ancient mystery of the mountains as night relented and morning came.

All for him, The Elder.

The mother of this young man who could speak with Those Beyond the Veil was coveted and desired. “Do you think she Called the Rain?” the Fat Priest said as his pudgy paw mopped the sweat from his brow. “Probably not,” he then said, answering his own question. He wiped his hand on his robe. “All this work, all this walking, hot sun, steep hills, bugs and who knows what watching from the trees, and all for nothing.”

“And if you’re wrong?” I said, my eyes on the distant hills awaiting us.

He grunted, the sound not quite a laugh, but not daring to be disrespectful.

“I do know this,” I said, keeping my temper in check as I refused his gaze. “It is said by those who know of such things, travelers and traders, those who’ve sat and supped and broken bread with her, that this woman speaks with Those Beyond the Veil.” I looked to him. “She has a rare and powerful gift given by the Gods.”

The Fat Priest watched me, his hand rising to shield his small eyes from the sun. “Is that so?”

I took a breath. Steadied myself. Willed myself not to smile, the desperate ambition of this simple man an instrument almost too easy to play. “If this is true,” I then said, “think of the glory that awaits. The eager affection of those painted women in those dark alleys known only by a select few. The ample reward, the coin, the respect, that’ll be showered on you from the most powerful of priests.”

He watched me, the small eyes narrowing to mere slits atop the rounded, reddened cheeks. “Who are you?” he said. “The Elder favors you. Why?”

Pushing forward from the stone, he rose with a grunt to take a lumbering step toward me. “It’s said you have access to him that others don’t.” He paused, the hand again rising to block the sun. “How did you get that?” Another step, the eyes still narrow. “Tell me.”

“I serve the Gods, the king.” My heart was racing, my throat dry. “I do as you do, my friend.” I offered an easy smile. One that was ignored. “I cannot say why the Gods, or the Elder, favor me, if, in fact, as you say, they do.”

Feeling the Fat Priest’s jealousy, perhaps even anger, I could not tell him the truth. Could not share the beginning.

How The Elder and I came to be was my secret to keep. 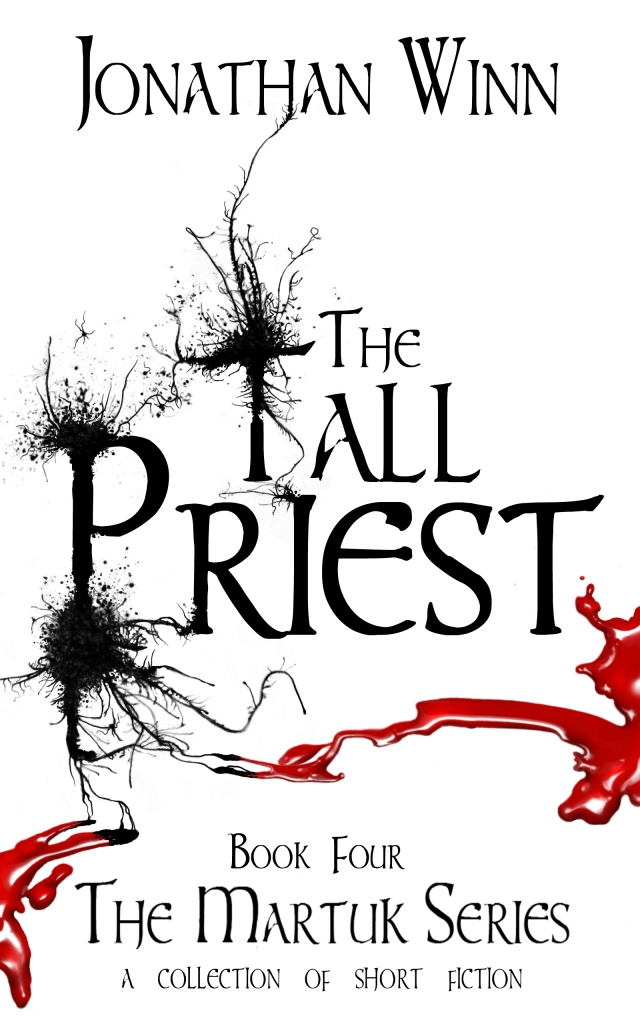 And pick up The Wounded King, the first installment, for FREE

Yep, you read that right.  The Wounded King, Book One in The Martuk Series, an ongoing collection of Short Fiction based on my award-winning debut novel Martuk … the Holy, will be FREE for one day and one day only, March 27th.

She interrupted me with a nod.

“It’s hungry,” she said, her voice low, the words almost a whisper. “Its stomach desperate for the meat, the muscle, the skin. If I don’t feed It, there’s pain.”

Her hand on her stomach, she continued.

“I am powerless, my son. I don’t want to. I don’t want this. It’s disgusting, it sickens me, it’s something I cannot stop, and it’s destroyed me. The taste, the feel of it in my mouth, the smell on my hands, my fingers –”

She stopped, this brief moment of lucidity gone as quickly as it began.

Closing her eyes, she cocked her head, distracted by something only she could hear. The morning had grown dark, the sun shadowed by a rare cloud.

I looked up to see a clear blue sky.

“A God is being born,” she finally said. “The pain, the anguish I endure, is this body dying so that this God, this Dark God, can be born. And I, as that God, will rule.”

I moved closer to her.

“Yes, It moves and It is only one shadow.”

It quickened, the dark, as it slid along the ground, vaporous fingers reaching out to my Mother as she spoke.

“It needed the flesh, you see. An eternity caressing all those bodies as they slept, lifetimes licking the skin, the flesh on its tongue only a taste, ephemeral, quickly gone.

“It needed to eat. Finally. Needed more. It needed to feel the life in Its mouth. It needed to tear the skin and rip the muscle and gnaw the bone. Experience being alive, experience living, all those deaths feeding It.

“And now It will live through me, with me, as me.”

The shadow grew, an immense cloud around us, the dust lifting from the ground to churn in the black, the warmth of day now the moist, steamy heat of something uncontrollable, unknowable, and wrong.

She no longer heard me, the silent song of these shadows obsessing her.

I grabbed her hand.

“Please …” I began as the Darkness lifted me.