I don’t know about other writers, but when I find I’ve written something a bit rough or cruel or viciously brutal— this doesn’t happen often, but it does happen — I feel more than a smidgen of guilt.

Not necessarily because of the experience the Reader will go through — they did sign up for it, though, so… — but more because of what I put the characters through.

For better or worse, I feel deeply for people who exist solely on the page. But that’s what I suspect gives my work emotional resonance: these people are real to me. Very real.

They are telling their stories. And, for better or worse, those stories follow me. Poke into my thoughts months, years, after being told. The consequences of what I create keep me awake at night.

No, seriously. That happens. A lot.

Almost a year after its initial release, Click, the third story in Eidolon Avenue: The First Feast, is one of those stories I can’t get away from. And it’s not just because of how brutal it was, but because of the innocence of the victims and the dangerous psychosis of the killer. 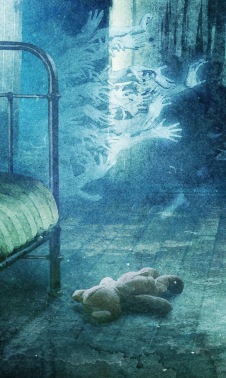 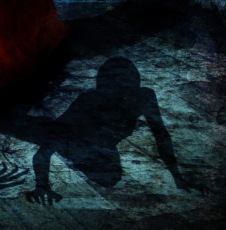 I’ve said this before, but I simply could not get my head around the absence of empathy and the glee he took in the act of hurting another.

You see, with my immortal Martuk, he does bad things, but there’s always a reason. So, at the end of the day, readers may disagree with what Martuk does, but they understand on a visceral, very basic level why he did it.

With Martuk, you hate him, you love him, you fear him and, most importantly, you understand the Why of his What.

He was pure evil. Evil and insanity. And, yes, there were reasons. A litany of Whys to his What. Wounds that drove him. Ancient scars that still bled.

But none of that excused what he, the Character, insisted I, the Writer, create for him.

I remember writing the story while sobbing — like, really SOBBING — because I HATED what was happening. Hated it. Made me sick to my stomach. Forced me up and out to take long walks just to escape it for a much needed breath of fresh air.

But it was the story that needed to be told.

You know, I still get emails and private messages via social media raking me over the coals for Click. Questioning my sanity, my kindness, my heart. Questioning what kind of monster I am to put on the page someone as horrible as Colton.

Which is probably why I’m feeling the need to write what’s turned into an open letter.

But, listen, those of us who invest ourselves totally in our work sometimes don’t have the control over the final product people think we might. Sometimes our characters want to tell stories that we vehemently disagree with. Sometimes they grab us by the arm and drag us, kicking and screaming and, yes, crying, much deeper into the dark than we ever wanted to go. And when we stumble free, back into the light, after the story’s told, we find ourselves changed, wounded, even scarred.

But that’s the deal we made to do what we do. Life isn’t always pretty and perfect. Sometimes vicious people do atrocious things with no rhyme or reason. As someone who writes horror, it’s my job to capture the barest hints of that so that my readers can exorcise, vicariously, their own demons. I guess. I don’t know.

All I know is that I relish returning to the relative normalcy and sanity of my dearest immortal Martuk as I dive into Shayateen, his third and perhaps final book.

Still, though, I do wonder if there should be apologies…perhaps.

Looks like I still have some psychological knots to untangle.

This was one of those times.

What attracted you to writing horror?

In my opinion, horror lets you write your own rules. I can create a haunting something out of a forgettable nothing in horror. A speck of dust, a loose thread, a glance in the mirror. In other genres, those everyday things are just that: everyday things. In horror, at least for me, they’re jumping off points for the total unraveling of a life, of one’s sanity, of one’s grip on reality.  For me, they’re the necessary first step into the hungry shadows of deepest dark.

For the rest of this fascinating — occasionally, just occasionally — read, head on over here.

Because, as I also said,

in my opinion, the more I dig, the more I realize we’re in a bit of a Golden Age when it comes to fantastic writers.

Jonathan Winn is a screenwriter as well as the author of Eidolon Avenue: The First Feast (Crystal Lake Publishing), the full-length novels Martuk … the Holy (A Highlight of the Year, 2012 Papyrus Independent Fiction Awards), Martuk … the Holy: Proseuche (Top Twenty Horror Novels of 2014, Preditors & Editors Readers Poll), the upcoming Martuk … the Holy: Shayateen and The Martuk Series, an ongoing collection of short fiction inspired by Martuk …

In addition to Forever Dark, his award-winning short story in Tales from the Lake, Vol. 2, his work can also be found in Horror 201: The Silver Scream and Writers on Writing, Vol. 2, all from Crystal Lake Publishing.

It’s ready, folks. The paperback of Horror 201: The Silver Scream, Vol.2 now on pre-sale. So clickity-click right here and have a good laugh at me trying to sound smart.

And so it begins.

In a rare confluence of events — think a massive meteor shower pummeling the earth while a rare comet circles the heavens around a total Solar Eclipse as we discover a Kardashian with actual talent — I’m going to have five book releases over the next three months.

First up, Horror 201: The Silver Scream

Horror 201: The Silver Scream, the follow-up to the Bram Stoker Award nominated Horror 101: The Way Forward, delves into the minds of filmmakers to see what it takes to produce great horror films, from the writing and funding process, to directing, producing, and writing tie-ins.

It’s a tome of interviews and essays by some of our favorite artists.

These are the folks behind movies and novelizations such as A Nightmare on Elm Street, Scream, Dark Shadows, Sleepy Hollow, Supernatural, Buffy, Resident Evil, The Stand, Sleepwalkers, Masters of Horror, The Fly, Critters, Tales from the Crypt, Child’s Play, Fright Night, Thinner, The Langoliers, Ted Bundy, Re-animator Unbound, Halloween, Apollo 18, The Eye, Night of the Living Dead, The Crow, The Mist, Pan’s Labyrinth, and Raiders of the Lost Ark.

Horror 201 also entertains. You’ll see a side of your favorite authors, producers, and directors never seen before – combining fun and entertainment with informative career-building advice.

Horror 201 is aimed at arming generations of authors, screenwriters, producers, directors, and anyone else interested in the film industry, from big budget movies to the independent film circuit, as well as the stage.

Whether you’re an accomplished author or screenwriter, writing as a hobby, or have dreams of writing screenplays or making movies, Horror 201 will take you on a behind the scenes tour of the Horror movie industry from Hollywood to the UK and Australia.

Horror 201: The Silver Scream is perfect for people who:

How about a cover?

Honestly, I love how the red of the car echoes the red in the title and the red in that other car. And the silver of the screen? With the woman screaming? To me, it’s ever so slightly reminiscent of —

So, one release down, four to go. And what are those other four books?

An essay in the second volume of Horror 201: The Silver Scream; Forever Dark, an award-winning short story in Tales from the Lake, Vol. 2; an essay in Writers on Writing, Vol. 2; and Eidolon Avenue: The First Feast.

All between now and January.

It just makes me feel all warm and fuzzy inside.

Okay, but, still, how cool is this!

Will update with links as the rest of these roll out.

Joe Mynhardt over at Crystal Lake Publishing shows us once again why he’s quickly becoming One to Watch with his new release, Modern Mythmakers: 35 Interviews with Horror & Science Fiction Writers and Filmmakers

“Modern Mythmakers is a horror-fiend’s dream – a bubbling cauldron of genre info straight from the mouths of the madmen and women we fans worship.” – Kristopher Triana, author of Growing Dark and head of Tavern of Terror

“I was struck by the skill with which Michael McCarty conducts himself. He should have his own nightly talk show or at least a radio program dedicated to his work.” – Zero Signal Magazine

“… beware the dark, and what lurks in the minds of those you read and watch in the wee hours. Highly recommended.” – Hellnotes

“Modern Mythmakers is a healthy-sized bowl of horror-themed Wheaties coated with inspiration that’ll fuel your writing and filmmaking passion. And for the straight up fan boys and girls, it’s full of spoonfuls of trivia regarding classic horror and science fiction film and literature.” – Horror Novel Reviews

And here’s a gander at the really cool cover. 🙂