Joe Mynhardt over at Crystal Lake Publishing shows us once again why he’s quickly becoming One to Watch with his new release, Modern Mythmakers: 35 Interviews with Horror & Science Fiction Writers and Filmmakers

“Modern Mythmakers is a horror-fiend’s dream – a bubbling cauldron of genre info straight from the mouths of the madmen and women we fans worship.” – Kristopher Triana, author of Growing Dark and head of Tavern of Terror

“I was struck by the skill with which Michael McCarty conducts himself. He should have his own nightly talk show or at least a radio program dedicated to his work.” – Zero Signal Magazine

“… beware the dark, and what lurks in the minds of those you read and watch in the wee hours. Highly recommended.” – Hellnotes

“Modern Mythmakers is a healthy-sized bowl of horror-themed Wheaties coated with inspiration that’ll fuel your writing and filmmaking passion. And for the straight up fan boys and girls, it’s full of spoonfuls of trivia regarding classic horror and science fiction film and literature.” – Horror Novel Reviews

And here’s a gander at the really cool cover. 🙂 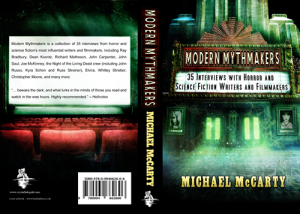 If Variety is to be believed — and it’s usually more right than not — “author” EL James has decided to write the script for the second Fifty Shades of Grey movie. Let me attempt (and I can’t promise my head won’t explode while doing this, but I’ll give it a go) to count the ways this is so very, very wrong.

A) Screenwriting, especially the adaptation of a book to film, is more than recording in script-form what happened in the book. If Miss James’ fiction writing is any indication, her work as a screenwriter will almost certainly lack the finesse, sophistication, pace and, oh I’ll just say it, SKILL that a screenplay for a major Hollywood movie needs. As I’m learning with my own spec adaption of Martuk … the Holy, you need to have a ruthless eye for what’s essential and what can be consolidated or completely chopped. It’s a very delicate balancing act, one that Miss James, according to first hand accounts from production, steadfastly refuses to do.

Listen, if Kelly Marcel, a gifted screenwriter with some very good films under her belt, can beat her head against the wall for months trying to turn Miss James’ first person present tense narrative-free drivel into something – ANYTHING – that might work onscreen and still come up woefully short (due, in part, to Miss James’ constant intrusion and obvious need for control), how in the hell does Miss James think she can pull it off?

B) The success of a book adapted for film is found in the creative team that works WITH the author to successfully help the story make the transition. In other words, the author needs to surround themselves with the best team possible and then let go and allow those who know what they’re doing get busy and do what they need to do. The goal should be having the film be a success for everyone, and that’s damn hard to do if a newbie keeps inserting his or her busy-body into every frickin’ decision.

Miss James’ unwillingness to take her hands off the wheel — and Universal’s head scratching (and, in hindsight, no doubt desperate) decision to give her unprecedented control — has taken what could have been a fairly good film based on an infamously bad book series and turned it into a hilariously bad movie (one that had a great opening weekend, but has seen a 60% drop since then).

Allowing a hack writer to pen what will most certainly be an amateurish script is asking for trouble. It’s putting a hopefully respectable and respected Director in a position of having to work with something that might be impossible to shoot, forcing a production team to work for many months on something that reeks to high heaven from the get-go, and cornering a Studio — A STUDIO — into putting a successful franchise in the hands of a first time (say it again with me, kids) FAMOUSLY PISS POOR WRITER. After the reviews of the first film, they NEED the second to be better. Period. Full Stop. End of story. And for a non-screenwriter to demand she write the screenplay …

My god, a gamble of that magnitude makes even MY head spin. And the clueless arrogance and hubris of Miss James … I don’t even know where to begin.

So, yes, let’s talk about the audience. The first movie had a smashing opening weekend. Driven by curiosity and, for fans, an almost knee-jerk need to defend something they like, people hit the theaters in droves. And if the reviews and audience feedback are any indication, the adaptation was a disappointing dud. One that made money, yes. But will it get repeat business, the cornerstone of every blockbuster franchise? Probably not. Will people be lining up as eagerly to see the sequel? That’s a big question mark.

Because if the sequel is as bad as the first one, the curious, having been sated with the first installment, may decide it’s not worth the price of a movie ticket and just catch it on PPV or Streaming. And the Fans Who Seek to Defend? Well, if they’re feeling disrespected — ANOTHER bad film of a book I love? Are they even TRYING? — they may reconsider.

Listen, the sequel NEEDS to be stronger. Period. And it needs a better script and less author intrusion. The chances of that happening if Miss James is in charge? Slim to none. And with her contractual control? Good luck getting her to do rewrites or agree to cuts that everyone agrees are necessary, but that she believes are fine.

In conclusion, what remains is this: for writers like me who are just beginning their Hollywood journey into AdaptationVille, the willingness of a Studio to allow even the slightest bit of control in the future is hanging by a thread. What if so-and-so ends up being another EL James with his or her hand in everything? And they have no idea what they’re doing? And they’re bullshit slows down production and costs us money? Ack! They’d run for the hills.

You know, it kinda sucks that, as writers, we’ve had to work doubly hard to help readers see they deserve better than the stupefying pile of stinking shit that called itself Fifty Shades of Grey. And, as readers, we’ve had to sift through the mountains of atrociously written Fifty Shades wannabes that have spread through the publishing world like an unfortunately timed yeast infection.

Are we now, as screenwriters and moviegoers, going to have to pay yet another price for The Increasingly Poor Decisions of EL James?

Hollywood. Films. Remakes, sequels, franchises. Adaptations of books. And where are the “new ideas” from Hollywood?

Let’s talk about this.

What most of you — and I’m talking mainly about those in the States — don’t realize is that Hollywood isn’t making films for you anymore. The domestic box office is one of the smaller pieces of the pie when it comes to profits. These days, their money is being made in China, Russian, India. That’s their audience. That’s who they’re focused on when they decide what to put into development or what script/property to invest in.

So, when looking at what films to make and, more importantly, what films they can market effectively to the biggest audience while still ticking all their demographic boxes, they tend to go either for iconic properties (Superman, Dracula, Batman, other superheroes) or earlier films they hold the rights to that they can successfully reboot, remake, rework with a young cast and hot director into something that can be discovered by a new audience.

Let’s face it. We can talk about art and beauty and films being an amazing thing, but, at the end of the day, Hollywood needs to make money. And, as mentioned before, it’s not being made in the States. It’s all overseas.

Wondering where your serious dramas went? They don’t play well in those foreign markets so Studios are a lot less likely to jump onboard and make ’em (unless they’re historical Oscar bait, like Selma, or have Meryl Streep in them). Romantic comedies? Nope. Again, it’s a cultural difference. What Americans find funny or romantic will confuse the heck out of those foreign markets. So, they don’t make ’em. And when they do, it’s usually a box office bomb. And, remember, they’re in this to make money, something box office bombs don’t do.

Now, when it comes to new ideas — and, yes, they do have them! — and especially adaptations of books (which need not be bestsellers, surprisingly), Studios tend to hope for a few things. Or at least that’s what I’ve discovered as Martuk … the Holy and Martuk … the Holy: Proseuche laboriously trudge their way to the silver screen.

1) Is it a franchise? Making one movie, and just one movie, isn’t in the cards. For marketing purposes, tie-ins, building an audience, etc., they’re really hoping you have a story that spans three books and can be told in six films. Having a reliable story they can tell over a decade or so is ideal.

2) IS THERE A STORY?????? Oh, and believable characters who actually talk like real people. Believe it or not, and this is something I hear time and again from friends of mine who are producers, a lot of the books suggested to them from agents and publishers HAVE NO STORY!!!!

Listen, Hollywood isn’t a big reading town. They read scripts and they read coverage (crib notes version of a script or book). But for those who DO read, they get downright giddy when it’s well-written (most books these days, even so-called bestsellers, aren’t) and feel like they hit the frickin’ jackpot when it has an actual story. Beginning, middle, end. Three acts. Pace. Intelligence. Something a screenwriter can actually work into a script because, MY GOD, that NEVER happens!

So, yeah, having a story in your book rather than a random series of events that just kinda happen helps.

3) A sense of mythology. And this one, to me, feels huge. Every successful book-to-film (talking about the tent-pole productions that anchor a Studio for the summer and are usually franchises) has come to the table with a world wrapped in mythology. And I’m not necessarily talking about an established mythology, Greek, Roman, etc. It can be one the author has created. Other worlds, ancient worlds. Gods, goddesses. Superhuman strength. Immortals and monsters. That gives a Studio so, so much to play with because, absent a very American story centered around love and life and drama, there’s now a narrative — one probably based on action, magic, struggle, and strong visuals – foreign markets will readily understand and enjoy.

At the end of the day, it’s one of the few things we writers can totally control. What we write and how well we write it. If Hollywood likes it, great! If not, then our Readers will still love us.

P.S. There are always exceptions to the rule, so the above thoughts aren’t written in stone. They’re just thoughts.

P.S.S. The opening weekend success of 50 Shades of Grey is an outlier when it comes to books-to-film (Americans living in a world lacking mythology). The success of the book IS the mythology. That’s what drove the Studios to adapt it to film. The fact that it had done so well as a book is what’s notable about that book series. It’s what they were counting on to get butts in the seat and post some strong opening week numbers. ‘Cause it sure as hell isn’t the laughably bad writing and bizarre lack of a story! And a huge kudos to screenwriter Kelly Marcel for doing what she could with piss poor source material.